Voyage to Belfast (by Paola Oliva) 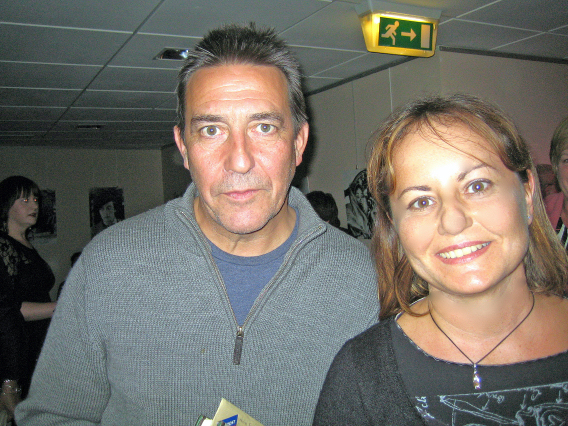 The idea to get and see Ciarán Hinds again was an unstoppable impulse after having him seen performing in The Seafarer back in New York. To get the tickets online and to organize the trip was easier than you could imagine. This time I wanted to have somebody with me to share the experience (since last time I travelled alone). For that I took a friend of mine who had learned about that great actor (she had not seen ROME because in Italy it was not quite as successful as in the rest of Europe or in the States).

We arrived on Friday 3rd at 23:30 because our plane was delayed, we stayed over at the Radisson Hotel which is quite comfortable.

It was raining all day until Sunday Oct 5th! Together we took a trip around in the city by sightseeing bus and on foot. Finally we arrived there later in the evening rain-sodden!

We saw the film which my friend Stefania enjoyed as well although she only understood a little English.

After the break we got back to our seats in the first row and ours eyes met when he entered the stage with the journalist. The Interview began with his biography and his cinematographical experience, it seemed that questions have already been answered that way before.

Later questions of the audience were answered. He always answered quite composed and witty, never appeared like a star, more like someone with an ordinary job. And later on he talked to all of his fans. While the picture was taken from Ciaràn and me we exchanged a few words in Italiano.

Finally we shook hands, I thanked him and I left because I did not want to appear intrusive. I could have stayed longer, but my knees were shaking.

Now even Stefania has become one of his fans.

"Dancing again" in Belfast (by Sylvie) 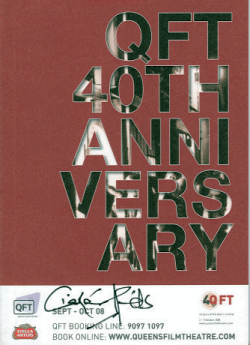 I am not used to play the fan game. I'm interested in ordinary people, not in celebrities. And Ciarán Hinds is just like this: an extremely modest man, charmingly understated, lacking any pretence or verbiage, "I'm no orator, he says, I need a script". Thus, here I am, in a plane to Belfast on October 4th 2008, slightly at unease, but still determined to play my part in the event which will take place tonight: the screening of December Bride, followed by a "conversation" between Ciarán and Marie-Louise Muir (BBC Radio Ulster), one of the special events programmed for the 40th year of the Queen's Film Theatre (QFT).

It is my first trip to Ireland. For the friend of Celtic culture I am (there always have been intimate connections between Bretons and Irish), Ireland is a mythic land. Unfortunately, I have only one hour left to walk around and to enjoy Belfast. It is raining cats and dogs and I have to find a pub to dry my hair and to remove my ruined makeup. Of course, I look like a drowned rabbit when I eventually arrive at the QFT. In New York, I felt completely frozen. Is it my destiny, that Ciarán will never see me at my best? I am asking myself if it is due to the famous Murphy's law or to Mr Lockhart's pernicious influence...

I can only cast a glance at the majestic architecture of the Queen's University before entering the cinema which, located in a peaceful street, looks like a typical English house. I enjoy the warm welcome in the lobby where we are offered a cup of tea or refreshments and can watch the clips screened on the walls. The atmosphere is cheerful; it seems that everybody knows everybody in that human-sized town which greets its child coming back home after a long absence. I catch a glimpse of his sister Bronagh, but I don't dare to speak to her in spite of my deep admiration for her works on women rights. 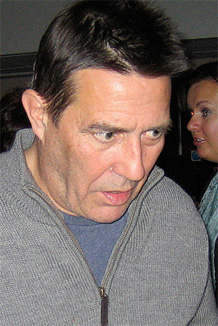 The programme starts with the screening of December Bride. The screen is not very big. I sit down at the end of the second row, the first one occupying only half of the space, there is nobody to block the view. The small stage is only three meters away so that I enjoy a full view. Ciarán doesn't attend the screening. Having bought a copy of December Bride on VHS, I know the plot, but nothing beats the big screen. Years have passed and the young, silent, slender Franck Echlin has little in common with the burly, impressive Caesar, but the actor's talent is already there, with his intensity, his restraint, his expressive eyes which say all that words can't tell. He is not a man of lofty speeches but with such eyes, does he really need to talk? He says that he is lucky enough to have a good face for the screen and nothing more. But the world is full of good looking men with no talent who will never become actors as much in demand as Ciarán Hinds.

After a short break, the long-awaited moment arrives at last. On the stage : two chairs and two micros, a coffee table with bottles of water - and here are the two protagonists. Ciarán is warmly acclaimed. He looks a bit tired, casually clad in jeans and a grey sweater (the same he wore last year in his Theatre Talk interview about The Seafarer). The shooting of McPherson's Eclipse has just wrapped in Cork and he has barely had enough time to jump in a train to Belfast. He begins the interview with his arms crossed, a bit on his guard, while Marie-Louise Muir reminds his childhood in Belfast, his beginnings as a dancer in Patricia's Mulholland company, his brief stay in Queen's University... Then, while the interview gets on, he warms up. He "speaks" with his hands, with all his body, "dancing again" as the amused journalist puts it.

Polite, soft-voiced and smiling, he doesn't try to show off. He speaks with humour and kindness, using simple sentences, ponctuated with silences and bursts of laughter. He has no great theory to set forth, no bombastic discourse on the art of acting, he doesn't pretend to do anything else but his job as well as he can. He doesn't hesitate to express his admiration for some others actors he worked with, and, if he can laugh at himself, he never speaks ill of anyone. It's refreshing, relaxing. Perfect mastery of the art of communication or virtuous reserve of a wise man who has nothing to prove? 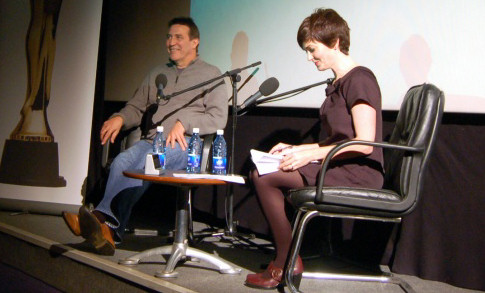 Short clips are shown between the questions : from Rome, the scene where Caesar learns about his daughter's death. A row between the characters of Spielberg's Munich. The killing in a confessional of In Bruges. The derrick fire in There Will Be Blood. Miss Pettigrew who lets fall her cake on Joe's shoes. Standing on the left side of the stage, Ciarán looks attentively at the screen without letting his feelings come through. He doesn't seem very concerned with his own image. He has done his job, we have loved it, everything's All rights.

One hour and fifteen minutes later, we let him leave, but to find him again in the lobby where he kindly agrees to be photographed and to give autographs. In spite of my uneasiness (for it's definitely not my cup of tea to approach a stranger and "steal his image" as if he is a god), I ask him to pose for me (may he be thanked for his patience I put to a severe test), and I deliver a few messages on behalf of other persons. Mission accomplished. Now, we can talk a little, more freely, for it's not the first time we meet, but that's another story, the story of a true gentleman whom everyone would like to be friend with, in real life...

Official photos, thanks to Mrs. Sarah Hughes, Press and Marketing Officer of the Queen's Film Theatre